Making Groups Work in the Classroom

Last semester I participated in the Undergraduate Research Scholar Program here at the College. The student I worked with was interested in researching the impact of positive teacher-student relationships in the classroom on student success, and one of her information gathering methods was to observe a number of faculty members at MCC.

One technique she noted during her observations was the teaching style each instructor used: lecture, lab, small group work, discussion, or something altogether different. And although she drew a lot of interesting conclusions based on her observations, the one I found most interesting was this:

Students were more interested in group work if there was no grade, or if the grade was low-stakes.

Now, I've always worked under the assumption--based on my own experiences--that students care less when there's nothing "at stake" (i.e. no grade). This has, in particular, caused me to stop grading participation (a sticky wicket to try to grade anyway) and to no longer "grade" attendance, and to use in-class activities instead. But this group grade conclusion was really a revelation!

After talking with my student, Shaz, and Anne Humphrey and Elaine Whalen, I came up with some ideas to make group work work for the classroom:

Use group work as a method of practicing what they'll need to do on their own for an independent assignment
The second paper my English Composition 2 students write is an argumentative problem solving paper. Right after I hand out the assignment and explain the principles of problem solving, I have the students practice problem solving during an in-class activity. By doing this, the students can try out the new concept they've just learned in a low-stakes group activity (currently, it's weighted at 3% of their overall grade). And, if they pay attention during the group work, they can use the exercise as a template for the paper they'll spend the following month writing.

Let students "fire" members of their group
In Elaine Whalen's group research project, students can "fire" a student group member who is not pulling her weight. The group must give the student in question a verbal warning, and then a written warning, and the instructor must know about all of it. The student who has been let go from the group will either get a zero on the project or she can ask another group to take her in and hopefully redeem herself. Elaine has found that students who get "fired" work doubly hard in their adopted group.
Use the drafting process for student accountability
If you're giving a group grade on a project but want to make sure that each student has contributed their fair share and has mastered all of the content--not just a small portion of it--ask each student to submit a "rough" final project with all elements included. This allows you to track their participation, and it allows the full group to then decide which elements from each individual student's work should be included (they vet the pieces to create a stronger "whole" piece).

Assign a student to be the designated a-hole
The book You Are Not So Smart by David McRaney (yes, the title is awful, but it's an interesting book) has a chapter on "Group Think." McRaney writes about this phenomenon. The misconception, McRaney writes, is that "problems are easier to solve when a group of people get together to discuss solutions." But the actuality is that "desire to reach consensus and avoid confrontation hinders progress." 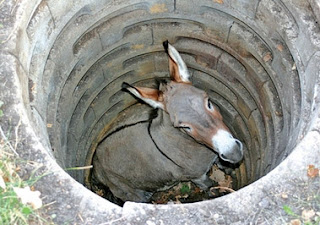 Based on that idea and the rest of McRaney's chapter, we can suggest a few things for successful small group problem solving:
What have you done in class to make group work work for you? Let us know in the comments section below!

Posted by Five Minutes of Faculty Development at 1:27 PM

Click on our logo to get back to MyMCC

Educator Advice and Support - Brought to You by NEA

Classroom Management Tips – Brought to You by NEA

Teaching Strategies – Brought to You by NEA